The new repeater TX site is now operational. It is located in the north end of Chatham. The antenna is at approximately 70 feet with fed by a 40 watt transmitter. Handheld coverage is excellent in all of Chatham and good to fair from Thamesville, Dresden and Wallaceburg. Thanks to everyone involved for their generous support!

This is now a receive site (code named "Chatham North") is now installed and operational. Everyone did an exceptional job - especially considering it was a little on the windy side.

Three antennas (and three runs of feedline of course) had to be installed as this is a full TX/RX site. Three radios and a set of four filter cavities were also aligned and installed at the site. Two members then took a drive to Sarnia where they had excellent receive on the repeater well into the city. Some issues (hum, de-sensing) were observed but will be addressed in the near future.

UPDATE: Althought not optimal, the TX antenna was installed at the 40' level and the de-sensing issue has mostly disappeared. TX range isn't nearly as good but is certainly acceptable!

UPDATE: Since this is now an RX only site, most of the equipment has been removed and is being used at the main TX site.

We have a new repeater site in the eastern section of Chatham-Kent! This should significantly improve reception of the "Mighty 712" in the eastern part of the county - including the 401 corridor from Rodney, West Lorne and Dutton as well as Bothwell to Dresden. View From The Bottom

VA3OT did a superb job "up there" carefully aiming everything and securing the antennas and coax. It was quite a lot of work. Please buy Dan a frosty cold one the next time the oppurtunity arises! Excellent job DAN! VE3LFD did most of the technical work at the bottom adding connectors, hooking up radios and installing them in a new box at the bottom of the site. MUN/UGG did some of the grunt work fetching tools and unravelling coax and ropes. Our thanks also to VE3FEX for extra support.

Thanks to all that participated in this project. Everyone did an outstanding job on this and past projects to get where we are today. (NOTE: As I was not involved in any of the past projects, I cannot vouch for who did what in the past. If you have any stories of past projects PLEASE put them in the Forum so that others may enjoy them - VE3UGG)

One (or two) more site to go! Once the north-west repeater is installed, H/T coverage of the entire county should be possible. Stay tuned!

The VE3KCR repeater is our legendary flagship machine, known as "The Mighty 712." It's been in operation in one form or another for over 30 years. With a powerful transmitter, high antenna, and several remote receive sites, this is one of the most sophisticated single machines in Ontario.

*Most RX sites require a 100hz PL on transmit.

The main system used to be located at a broadcast tower east of Chatham, where we operated a Kendecom Mark 4-CR repeater equipped with autopatch and interfaced with a Hall Voter System. The input signal was reveived from a Sinclair 4 bay VHF antenna mounted at the 460' level, using 7/8" Andrews feedline. There was also a Sinclair 4 bay UHF antenna at the same level to accomodate the remote receive sites.

Each remote receive site is equipped with a Kendecom crossband repeater that monitors the input frequency of 147.720, and retransmits it back to the main site on a unique UHF frequency. There are remote sites in Windsor, Leamington, Belle River, Chatham, Ridgetown and Shetland, with another planned for London. These sites receive only - the signal on 147.120 originates from several diverse on-channel transmitters around the community.

The VHF signal was received at the tower site by the main Kendecom receiver. The UHF antenna fed an 8-way Sinclair splitter, and a Kendecom MR4 receiver for each remote site. There was also a diversity VHF receiver with a beam antenna at a lower level.

Audio from each receiver was fed into the voter, where the SNR was analyzed. The best signal was passed to the transmitter. Most remote sites use a 100 Hertz PL. The user need only key up and talk - the repeater and voter do all the work.

The repeater used to transmit 1 kW with a 3CX800A7 amplifier. This was replaced with a 600 watt TPL solid-state amplifier, with provision for automatically folding back the power during enhanced propagation. The feedline used was 7/8" Andrews hardline, running up to a Sinclair 4 bay VHF antenna at 570'. This combination provided in excess of 2 kW of ERP, making it one of the most powerful systems in Ontario in its time.

Remember that no matter which remote receiver is picking up the signal, the best signal is transmitted. When pointing a beam antenna, you may be hitting a receive site that is not on the same heading as the transmitter. 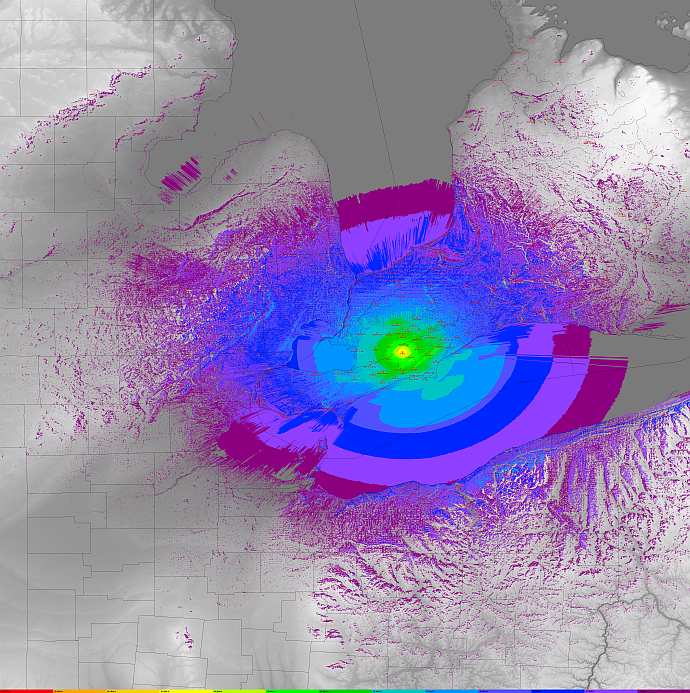 Historic VE3KCR repeater transmitter mobile coverage map, assuming antenna height of 5 feet, generated by SPLAT. This repeater features several remote receive sites, which extend the receive range considerably. Each is accessible automatically with a 100 Hz PL on 147.120+ MHz. Click here for a larger plot (1.34 MB) that can be zoomed and scrolled.